JB Redmond lives on a farm in western Kentucky, happily inhabiting his man-cave. The cave is filled with Harry Potter memorabilia, along with posters, models, and even costumes from Highlander (all movies, all show years), Lord of the Rings, Star Wars, Star Trek, and Twilight.  A full-sized suit of armour stands next to his water cooler, and it absolutely will freak you out if you walk through the cave late at night. His movie collection is at 600 and counting, never mind the endless audiobooks on his iPod. He spends most of his time writing, listening to music, watching movies and series he enjoys, listening to books, dreaming up new story ideas, chasing dogs and cats out of the cave, drinking coffee, and listening to the parrot whistle Andy Griffith. Being a published author was his lifelong dream, fulfilled in 2009. He looks forward to more successes in his bright future.

My name is JB Redmond.

Look for me in my man-cave, way out in the countryside of Kentucky.

I’m 29 years old. I was born about 60 days before I was due, and the fourth day I was alive, I suffered a massive stroke. No one knew if I would walk or talk, or be able to do anything for myself at all. I was diagnosed with Cerebral Palsy, and then with autistic features, and when I was four years old, I could only say seven words. I was scheduled to start school in a self-contained special education classroom designed for children who would likely be fully dependent for the rest of their lives.

Then, a lot of things changed. I learned to talk. I learned to talk so much that my mom threatened to sue the hospital that told her I would be non-verbal, so they would have to take out my vocal cords before her ears fell off. I didn’t talk very plainly, and still don’t, due to dysarthria–­but I would hold my own in an Olympic chattering event.

I have never able to walk, my muscles are weak, I have rods in my back, I have wounds on my feet that won’t heal, I have seizures, and I’m legally blind. I’m telling you this because if you meet me, these are the first things you’ll see. You won’t be able to help it, and I won’t get mad at you for that. I’ll roll up to you in an electric chair, extend a hand that won’t hold itself quite straight, and say hello with slightly slurred speech. I might be looking a little to your left, too, because my eyes don’t always cooperate. We’ll be polite to each other. If you can’t speak a few phrases in Klingon, have never tried to cast one of the spells in the Harry Potter books, and haven’t wondered at least once what it would be like to be a vampire or a dragon, then we might not have much in common. If, however, you can point to the desert world of Arrakis on a map of the universe, confidently sketch a photon torpedo (dorsal view), or prove fluency in Elvish, Entish, or the tongues of Men, we might be headed to lunch. If you spell Neil Gaiman’s name correctly, and you can do a dramatic reenactment of any chapter in Bram Stoker’s Dracula, I’ll even buy. “I’m a hard nut to crack, and I take it standing up,” or at least sitting straight and rolling fast.

What you won’t be able to see when you first meet me is this: I’m a published author. I read all the time­–though in my case, the proper term would be “listen” since I read by audiobook–­and I write all the time, too. I dictate, using an old-fashioned cassette recorder, and my mother types up my finished drafts.

Obviously, I most enjoy science fiction and fantasy, but I’ve never found too many disabled characters in the books I enjoy, unless they’re villains or buffoons. In fantasy, disability tends to equate with evil or sainthood, and that gets seriously old, very quickly. In science fiction, disability usually gets cured by technology, genetic manipulation, robotic implants or exoskeletons, or advanced surgical techniques and medicines. Disability never seems to be okay, or allowed to exist in futuristic worlds, unless they’re dystopian. Recently, I was thrilled to see the movie Battleship, in which the character Lieutenant Colonel Mick Canales (an Army veteran and double amputee), played by Gregory Gadson, has a realistic disability. The solution is equally real-life, his prosthetic legs, and his struggles felt both very real and very personal to me. Best of all, he wasn’t a character to be pitied, and he didn’t see himself as weak or ineffectual. Neither do I. And I hope to see more characters like this in both books and film, played by people who face the challenges in real life (don’t get me started on using able-bodied actors to play people with disabilities).

As for me and my writing, I began telling stories just as soon as I learned to talk (please reference the bit about my mother’s ears falling off). My body couldn’t play, so I focused on creating worlds and universes and characters and stories, and that was how I coped with not being able to do things like other people my age could do. I remember telling stories to my family and friends on long trips, and I particularly loved entertaining much older relatives like my great uncle. They seemed to listen better, and to enjoy the stories even more. When I got older, I began using a cassette recorder to dictate, and that’s how I wrote my portions of Oathbreaker: Assassin’s Apprentice and Oathbreaker, Prince Among Killers (Bloomsbury, 2009).

Co-authoring these books with my mother Susan Vaught was one of the greatest achievements of my life. Having novels published built my confidence, and I’m working on several more fantasy tales–­this time solo! I still use cassette dictation, because voice recognition software can’t yet handle my dysarthria. Also, I can’t edit the text myself, due to my visual and motor problems. Dictating works better, but it’s getting harder and harder to find traditional cassette recorders and microphones. I may have to learn digital dictation soon (Boo! Hiss!). We could do a whole topic on BETTER ADAPTIVE TECHNOLOGY PLEASE, and while I’m at it, why can’t all stories automatically get audio versions? Because I’m totally sick of getting into a series, then having the last few books be print only.

The most wonderful thing about words and writing and stories is, there are no limits. I don’t plan to limit myself in any way with what I write, or how high I reach in my goals.

My name is JB Redmond.

Look for me in the hinterlands of Kentucky–­or on the shelves of your local bookstores, all over this country, and all over this world, and out of it, too. 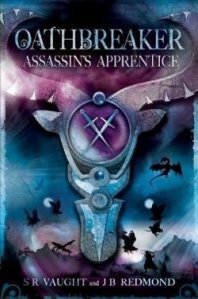 A ruling lord orders an atrocity so devastating it changes the course of history.

So begins this epic tale of love, trust, and betrayal, in which two boys must put aside their childhood understanding of their treacherous world and accept their own incredible power to make a difference.

“Excellent piece of high fantasy… None of the characters are cardboard cutouts of fantasy archetypes; they are richly drawn, compelling, and unique…” – VOYA

“This novel is best suited to voracious fantasy readers eager to devour another story of an unlikely hero caught up in an epic adventure.” – School Library Journal

Know of a book featuring a prominent disabled character that's not on our Goodreads list?

Do you want to submit a review copy?

Are you disabled, and do you want to contribute a review or article?